Barbara Barrick McKie will have two of her art quilts exhibited in each of two shows: the 2010 AQS Quilt Show & Contest (Knoxville, TN) and in Quilt Odyssey (Hershey, PA) this summer.

The AQS exhibition will be held at the Knoxville Convention Center July 14-17, 2010 and will include McKie’s Cool Camels of Egypt and Mommy and Me.  Check AQS’ website for more details about the show: http://www.americanquilter.com/shows_contests/knoxville/2010/general_info/

To get a sneak peek at these and other beautiful quilts by Barb McKie, visit her site: http://www.mckieart.com/Pages/thumnail_pgs/Art_Quilt_Main.html

A revealing look at our sense of identity. Artists share their personal experiences regarding inclusion or exclusion, joining or separating from a particular group and how that has influenced their sense of personal identity (examples include but are not limited to culture, race, religion, gender, occupation or family tradition).

· Artists must be current members of Studio Art Quilt Associates (SAQA) and reside in Connecticut, Massachusetts or Rhode Island

· Entry is by digital image only

· One entry per artist – if your work is a triptych or must be submitted as more than one piece, please explain the reasoning in your artist statement.
Entries must be a Minimum of 20” per side and no longer than 90”.

· Wall hangings must include a 4” wide sleeve on the back

· Artwork may be published in a catalog of the exhibition if sponsorship is found.

· Artwork may be for sale. WAC will collect a 20% commission on work sold during the Exhibition.

· Due to lack of storage space at WAC, artwork must be delivered to the Art Center at the time of Exhibition set-up. (January 15th between 12 – 3 PM)

October 1, 2010 DEADLINE FOR ENTRIES *Entries will be submitted by digital image via email

November 1, 2010 Notification of acceptance (All notifications will be forwarded via email)

SAQA-CT members Barbara McKie and Diane Wright are among the 46 artists chosen to exhibit work in “Creative Force 2010”.   Barbara’s quilt “Observe and Discover” and Diane’s “Evermore” will travel with the collection until next summer.

The Creative Force special exhibition will begin at the International Quilt Festival (IQF) in Houston, TX November 4 – 7, 2010.  It will then go to IQF in Cincinnati, OH in April 2011 and then IQF in Long Beach,CA in July 2011.     Additional venue locations to be determined.

Creative Force’s theme is “A survey showcasing the breadth and depth of work being created by SAQA artists – The Best of SAQA.”

It’s my pleasure to announce: SAQA Connecticut has a new Co-Representative. Diane Wright has been a member of SAQA for years and has been very active in the Fiber Arts community, especially along the Connecticut Shoreline.   She has attended most of our Regional Meetings and helps organize fiber art events through “Sisters in Cloth”, so many of you may have already had the pleasure of meeting her in person.

I believe Diane has a vision for the future of SAQA-Connecticut.  Her efforts in organizing last year’s fiber art events in Guilford were part of a plan to make our State known for art quilts.  Like me, Diane recognizes the tremendous amount of talent and expertise that our members possess.  Our goal is to create an environment where artists are supported and encouraged at every stage in their creative journey.  Please join me in welcoming Diane Wright as CT’s new Co-Rep. 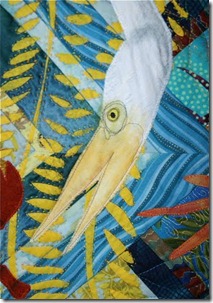 Meet Diane Wright: In Her Own Words

I have always been interested in art. As I child I used to tell my parents that when I grew up I was going to be an artist. Somewhere along the way I incorporated the feeling that I needed to be “something much more serious”. Translate that to be: considered more productive and relevant by my parents.

I have always studied art as time and circumstance allowed. It was real therapy for me during some stressful, high demand years. After I paid the last college tuition payment for my last child, I made the first of what would be many steps in following my heart. I followed the man who would become my husband to Australia to live for several years. 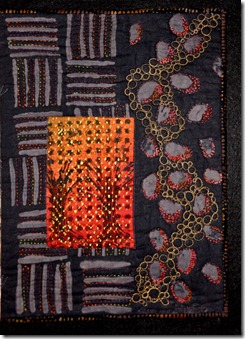 While in Australia I studied art. This time Australian Aboriginal Art. I became knowledgeable, was accepted in several desert communities and, along the way, developed a fine collection of Aboriginal Art. At the urging of some of those artist friends, I began to represent them to universities, galleries and museums along the East Coast when we returned to the US. Without actually working in my own right, I had joined the art field and was very happy.

At some point I needed a baby gift for a couple of friends in Japan who unexpectedly, and delightedly found themselves pregnant. I had sewn before. My grandmother was a quilter. My mother did every sort of textile work there was. How hard could it be? My traditional American patchwork baby quilt was the beginning of a two decade long love affair with quilting. While the quilting started out traditional, it wasn’t long until I heard the art quilt siren’s song. Since the mid 1990’s I’ve been passionate about my work. I tried to continue my representation of Aboriginal artists and explore art quilting, but when my husband and I were transferred from our home in Florida to CT in 2000, I decided to devote my energies exclusively to art quilting.

Bereft of quilt buddies, I started a quilting group from members of the local Newcomers’ Club. That group (with a core of the originals) has morphed over the years to become an art quilt group that exhibits locally and is enthusiastic in its support of SAQA. 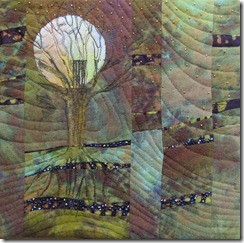 I have always been inspired by nature and, because my Air Force father was relocated innumerable times, travel. Two marking events were the years that we lived in Japan and then my later life in Australia. I, and, naturally, my work, have been greatly affected by their cultures, terrain, colors and history. My artist style reflects these affections.

As for my goals, they are simple: I want to produce more and more work and have it be of such a quality that it receives recognition. I don’t think I’m alone, as most artists strive for recognition of their work. To that end I think it’s important to promote all of our work and SAQA is the perfect umbrella.

Fiber Art by Catherine Smith, On Display in Connecticut and Rhode Island 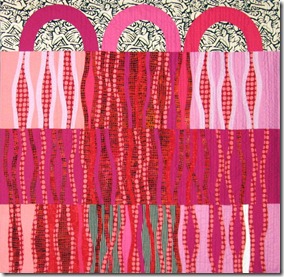 A Reception and Awards Ceremony will be held THIS Sunday, May 9th from 2pm – 5pm 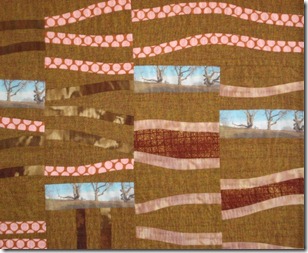 “15 Hay Bales” (detail lower right) also by Catherine Smith, is on display now at the Artists Cooperative Gallery of Westerly as part of the 17th Annual Regional Show.

The 17th Annual Regional Show runs from Thursday April 29 through Saturday May 22.

Gallery hours are 10AM to 5PM from Tuesday through Saturday or by chance.

The Gallery members also host a new show's Opening Reception on the first Wednesday evening of each month during the Westerly Pawcatuck Art Stroll. Please pick up a new 2010 Art Stroll Map at ACGOW.  For questions or additional information please contact the Gallery at (401) 596-2221 or see www.westerlyarts.com for Gallery and Artist information.

This image depicts a detail of my "Milk Thistle" sculpture that will appear in the Art of the Northeast Show at the Silvermine Guild Arts Center.

To see the entire piece in person, you have to attend the show, which runs from April 30 - June 11. The center is located at 1037 Silvermine Road in New Canaan, Connecticut.

If you can't make the show you can see the entire piece on my website.
The Silvermine Galleries are recognized as one of New England's most respected showcases for established and emerging artists. The highly regarded Art of the Northeast, begun in 1949, is held each spring. The exhibition attracts thousands of entries from artists residing in the nine northeastern states.
This is the first time that one of my sculptures will be publicly exhibited and I'm thrilled.

Living in a Virtual World

We are living in strange, isolating times but SAQA-CT is still here for you. Many of our events and exhibitions are digital and virtual, but... 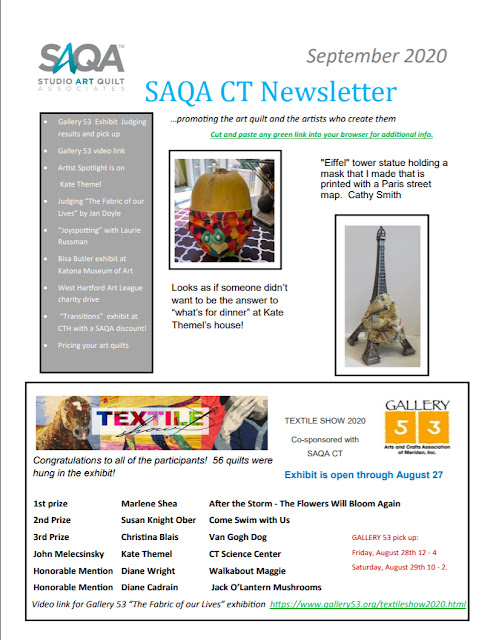